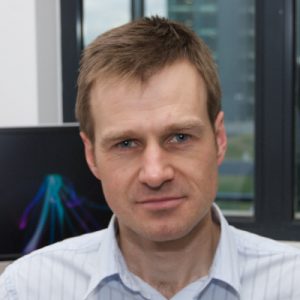 In addition to managing a team of 11 bioinformaticians, statisticians and software developers, Matt has contributed to various research projects, particularly focusing on analysis of cancer genomes and has developed a number of analysis pipelines and tools for identifying variants in tumour samples and circulating DNA. He has provided bioinformatic support to the UK oesphageal adenocarcinoma cancer genome sequencing project within the International Cancer Genome Consortium (ICGC) and played an active role in an international benchmarking exercise that evaluated the performance of somatic mutation calling approaches used by 17 ICGC project teams from across Europe, the United States, Canada, Japan, China and Australia. He has also gained experience in the analysis of single cell transcriptomic data and quantitative proteomic data from tandem mass tag (TMT) mass spectrometry.

Matt oversees the bioinformatics and statistics training programme within the institute, working in partnership with the Bioinformatics Training Facility at the University of Cambridge, and has helped develop and run training courses in R for Cancer Scientists, cancer genome analysis, introductory statistics, Docker containers, and Shiny web application development, as well as the popular Cancer Research UK Bioinformatics Summer School hosted annually for the past 6 years.

Following a first degree in Chemistry from University of Oxford, Matt completed a D.Phil. in Computational Chemistry also at Oxford. Matt gained over 10 years commerical software development experience in computer-aided drug design and life sciences, consulting for and delivering informatics solutions to several major pharmaceutical and biotechnology companies, prior to joining CRUK CI.

No items to report